The French Breguet 14 Bomber was a highly successful Medium Range Bomber used in World War One. First flown in 1916, The Breguet was 39 feet long and featured a 50 foot wingspan.  A twin-seater, she was fast for a Bomber at 112 mph also had an operational ceiling of 22,000 feet. Armed with multiple twin fixed Vickers .303 Machine Guns (for Pilot and Observer). As a Bomber, The Breguet carried 32 wing bombs in the 18 to 25 pound range. Over 5,000 were produced and were popular with American Bombing Squadrons. Some 90 known French Bombing Escadrilles deployed The Breguet 14 on bomb runs in Germany and The Western Front. The Warplane retained it's popularity in France after The War and was retained in it's inventory until 1926. 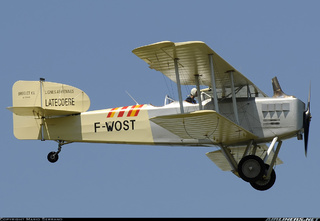