A lesser known Armored Car used during World War I, The French manufactured Charron was mostly produced for Imperial Russia. Known there as The "Nakashidze", it was first developed in 1905. Weighing 3-tons, it could carry 3 to 4 crewmen. The Charron Nakashidze had .032-inch plate. The Car had a land speed of 28 mph, and also had a 62 mile range on one Tank of fuel. Armed with a Hotchkiss Model 1902 Machine Gun ad it's primary defense, it also featured steel plating "skirts" on the tires to minimize wear and to protect them from puncture. Only 16 Models were produced with 10 going to Russia by the end of the production line in 1906 (all of which saw World War I service). 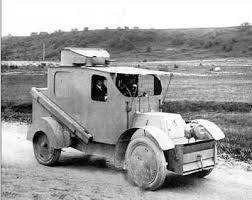