John Fremont was an important US Army Officer, who was heavily involved in military operations against Mexico in California – during The Mexican War. He had served as a Scout and Diplomat. He would also be important with regards to The Peace Treaty with Mexico (giving many concessions important for California''s future growth and possible admittance into The Union). He was the first Republican Party candidate for President in 1856. During his California Expeditions in the 1840s, his wife made him his personal flag. Based on The US Flag, it featured 13 stripes of alternating red and white. In the upper left quadrant (Canton), a white field held a blue Eagle. 26 5-pointed stars were arranged above and below the Eagle. Fremont used this flag throughout his missions in California. 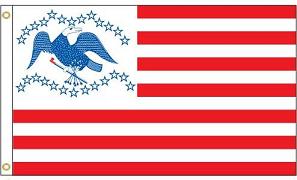