Located in Upstate New York (US) – near The City of Rome, Fort Stanwix was built in 1758 by The British Army, during The French and Indian Wars (a North American extension of The Seven Years War in Europe). The British needed to establish a Treaty with local Native Americans to assist them in conflicts with The French (who were doing the same). It was at Fort Stamwix that a major Treaty was entered into with The Iroquois Nation. It was garrisoned by several British Regiments in 1762.

Abandoned in 1758, The Star Fort Classed Fortification fell into ruin until renovated and occupied by American Colonial Forces in 1776 – as ''Fort Schuyler'' (The American Revolution). Several important key regional battles were fought both near and at The Fort. Stanwix was besieged in 1777 by a Force of British Loyalist and Native Americans. ''Legend'' cites that The Fort was the first American Military installation to fly the ''new'' National Colors of The Stars and Stripes. Despite the best efforts of The British, The Fort never fell.

An accidental fire destroyed The Fort in 1781. It was again abandoned and not rebuilt. During The War of 1812, a large Stone Blockhouse was erected on the grounds of The Fort, and used by The Army for supply storage (protected by a Company of Infantry assigned). Declared a National Monument in 1935, Fort Stanwix would be reconstructed to it's original 1750s appearance.  As stated a Star Fort, Stanwix was constructed on granite stone. It's (4) Bastions are surrounded by a Dry Moat. The defensive walls are roughly 12-feet in height and 8-feet thick. The Central Parade Ground once housed several Barracks, Armory and related Stores. 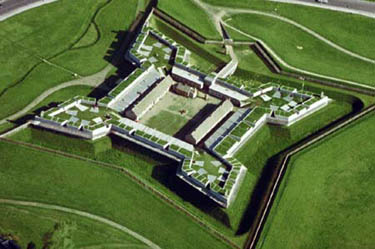