Structures dating back to the 5th Century have been found on the site of Fort Bard (located in Northwestern Italy above The Town of Aosta). A smaller Castle was also constructed there in the 10th Century. Between 1830 and 1838, Charles of Savoy began to construct the present structure. Designed as a Spur Castle, Bard featured all the “latest” artillery designs and emplacements. Fort Bard saw action during The Napoleonic Wars in 1800, when 400 soldiers defended against a French Army of 40,000. For a 2-week period, the Garrison successfully thwarted Napoleon's plans of invading Italy from The North. Enraged, it was said that The Emperor himself ordered Fort Bard be razed. It was and all 400 defenders were killed. The Fortress was rebuilt after The Wars. The Fort, which features 10 foot thick Defensive Perimeter Walls, additionally features 3-levels (2 of which were used as Artillery Galleries). Powder Magazines, Armories and other military buildings and Quarters (for 300 troops) were included. When fully supplied, Fort Bard could withstand a 3-month siege. In the late 19th Century, Fort Bard lost all it's military importance. It was still ceded to The Italian Army as late as 1975 (as an Armory and Ammunition Storage Facility). It was closed in 1990 for renovations, and reopened for Tourism in 2006. 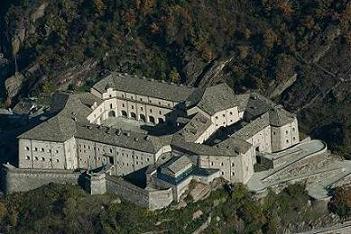