Flag of The Kingdom of France

Designed possibly around the 10th Century and used up until the 13th Century, The Kingdom of France united under The Carolingian Dynasty. The Standard used was a blue field with 3 large gold Fleur-de-Lis (or stylized flowers) – arranged in a tri-group in the center. The symbolism can also be traced to Frankish and Spanish uses as well. Most of The Kingdoms territorial possession incorporated some form of The Fleur into their Standards. The principle design would remain incorporated into some form will all French Flags up till the Revolution of the late 18th Century. 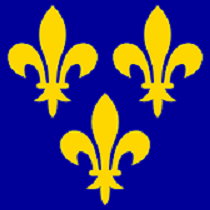