Another of The Aosta Valley Castle Defenses (Italy), Fenis Castle was constructed in 1242. It was originally a small Keep with a surrounding Perimeter Defensive Wall. Under commission of Boniface I between 1320 to 1420, Fenis was in a constant state of renovation and upkeep. Used as a prison and then as a Royal Residence – Fenis Castle featured a large collections of vegetable gardens (for Noble use, of course). It became the Noble Residence of The Challant Family until 1716, when it had to be sold off to pay his debts. Unoccupied, nature over grew Fenis Castle (which by this time was used as a stable). A series of renovations (1896 and 1935), were launched to renovate and repair Fenis Castle. It's Rounded Perimeter Defense Towers were repaired as were the Wall Walkways. Several Museums were placed inside Fenis. The Keep (with 3-floors), features an impressive collection of 15th Century Art. 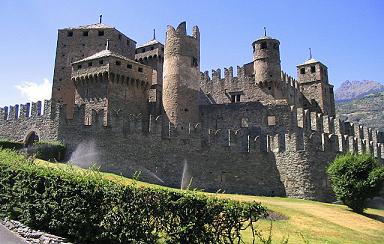