Located in Nograd Country, Hungary – Dregely Castle was built in a 1,500 foot plateau top in The Borzony Mountains. It is a typical Hilltop Castle structure. Dregely Castle dates to around 1285, under commission of King Bela IV (Hungary), it was administered local Nobility. In 1321, the Castle was overtaken and occupied by the Forces of King Charles I. Dregely Castle became a prison and storage location for State records. In 1483, the Castle fell under control of the Regional Archbishop. He used Dregely as a Hunting Lodge. In 1552, Ottoman Forces advanced to capture the Castle. With an Army of over 10,000 men – the Castle was garrisoned with 146 defenders. The Turks began a 2-day artillery assault on Dregely Castle. Many of it's Defensive Towers were severely damaged or outright destroyed. The garrison still refused to surrender. The Turks continued and slaughtered them to a man. The subsequent fall of Dregely Castle to the Turks would create a “domino effect” with other similar Hilltop Castles in the Region (all falling). Dregely was never rebuilt after the devastating attack. The Castle featured a Defensive Perimeter Wall some 20 feet thick in some locations. It featured a moderate Keep with Armory and related military structure. In 1991, work began at renovating Dregely Castle to it's pre-16th Century appearance. The castle can be seen at a distance, but cannot be visited. 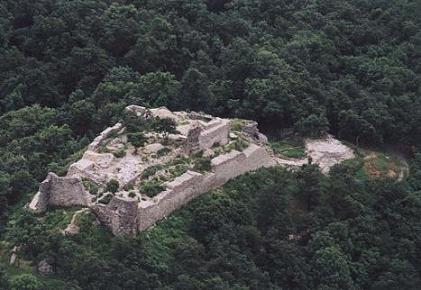