Flag of The Spanish Popular Front

The Spanish ''Popular Front'' was a coalition of Left-Wing Political Parties formed to contest the establishment of a dictatorship-style of Government (Franco). The Coalition consisted of mostly Communist and Anti-Fascist doctrine following peoples in Spain. Although they did not support the rival Anarchist Movement, both Parties fought along side each other during The Spanish Civil War of 1936-1939. The Party was dissolved in part after The War, although many supporters continued to support The Franco Government (Victors in The War) – solely on their support of His Anti-Fascist views.

The Flag of The Party (which would also serve as a impromptu ''Battle Flag'', was a Red Field in it's entirety. Centered on The Field was a White Circle into which was placed a Red Tri-hedren, the official symbol of The Popular Party. The symbol would also be used by several other non-aligned Parties as being Anti-Fascist. 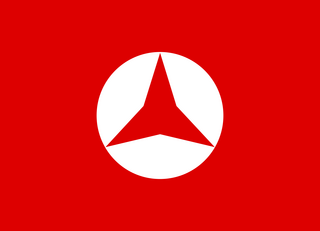