The European named ''Dahomey Amazons'', were female Warriors fielded by The Kingdom of Dahomey (Southeast Africa). The Kingdom existed from roughly 1600 to 1894 – before it fell to The French. They may have been established as a Royal Bodyguard to The Queen of Dahomey in the 18th Century).

Recruited from foreign captives with some Dahomey females added, recruitment started at the age of 8 years. By 15, a female Guard (also known as ''Minos'') was well versed in close quarters combat. They were not allowed to marry or have children (either violation bringing death). The Guards were trained in both survival skills and Military Besieging tactics.

Well treated and paid for their services. The Guard wore a form of Uniform (with color denoting Regimental affiliations) and carried Swords, Clubs and Knives. Later, they became Expert shots with Rifles. At their height, over 6,000 Female Guards existed. With French Colonization and the resulting War it brought, The Guards fought well but in the end lost out to superior French weapons and larger Forces. The last accepted surviving ''Amazon'' died in 1979 at the age of 100. 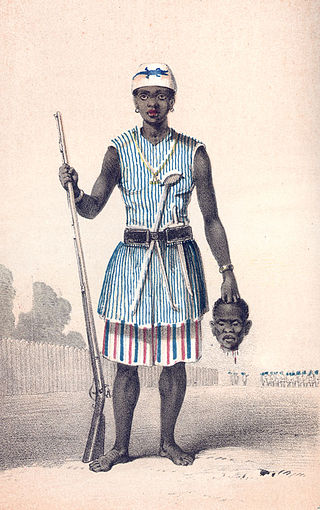