These somewhat popular 16th thru 18th Century ships were smaller versions of The Galleon. Their primary goal was to serve as Escort and Screening vessels to much larger Warships. Normally, a Crumster had 3 Decks and were 3 Masted, full sailed. They carried 8 to 16 cannon on each deck. Because of their size, they were fast and sturdy ships. They were attractive to many Pirates and Privateers because of these specifications. Normally due to their size, they could only crew 60 men. Crumsters also featured wide and deep hulls. This allowed Pirates to use them to transport their "earnings". Crumsters could engage any vessel, save a Man of War. 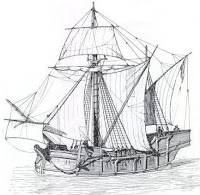