The American Civil War of 1861-1865, was an internal conflict fought in The United States of America which would define the direction that Nation would take (politically and economically) in the future. As with most ''Civil Wars'', it was a bloody conflict in which most Families were bitterly torn apart (often having opposing views and ''sides''). Split into two Regions at War – The North and The South, The United States had an established Army and Navy, The South (known as The Confederacy), did not. As such they had to ''create'' both.

The most important factor to The Military ''might'' of any Country is it's Navy. While most of The Confederacy's Navy was captured Northern Warships, they did build some of their own warships. Conversely, they had to also create a form of ''Naval Infantry'' Hence, the creation of The Confederates States Marine Corps.

Modeled after the famed United States Marine Corps. - The Confederate version was established in 1861in The state of Alabama. Raising over 900 Men and 45 Officers, The CSMC was moved to the Confederate Capital of Richmond, Virginia. While they were primarily assigned to the defense of Confederate Ships at Sea and the protection of Confederate Naval property (Forts, etc.) - some Units did in fact participate in several major Battles. They surrendered with The Confederate Government inn 1865.

The Flag used to identify The CSMC was based on The 1st National Flag of The Confederacy – also known as The ''Stars and Bars''. This was a vertical tricolor of Red, White and Red Stripe. In the Upper Left Canton, closest to The Hoist, a Blue Field was presented with a White Monogrammed Letter ''M'' (Marine). Surrounding the Letter was (7) White Stars representing those Southern States that had withdrawn from The United States. 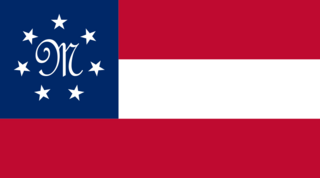