Unique in the fact that is was never used in battle, The Clark Flag was the official personal flag of one of the highest ranking Continental Officers in The Northwest – George Rogers Clark. Successful in keeping British interests in the Region to a minimum, not much is known about his flag. Consisting of a field of entirely green and maroon stripes (totaling 13) – no one is quite sure of why he picked the color scheme. The flag was copied and seen flown over various colonial frontier Forts throughout Indiana. Clark is also famous for being the brother of famed explorer William Clark (of The Lewis and Clark Expedition). 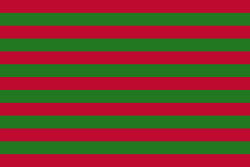