This ingenious weapon (based on a Standard Crossbow), was seen in 2nd Century A.D. China. The “repeating” version featured an attached “bow box” which could hold up to 10 bolts of wood or metal. The box “funneled” one bolt at a time through a slat opening – directing into the bolt groove. As the Crossbow fired, repeated gravity fed new bolts would drop. A 4th Century version was also made that could fire 3 bolts at a time. The Repeating Crossbow was very effective when used in mass. They had an effective range of up to 240 feet. A drawback was that the tension was not sufficient enough against Mounted Armored Cavalry. The weapon weighed anywhere from 4 to 6 pounds. So popular and well-made, that versions were seen in use well into the late 19th Century (during The Quing Dynasty). Attempts at larger land based devices were also attempted – but suffered from jamming and slow rate of fire. 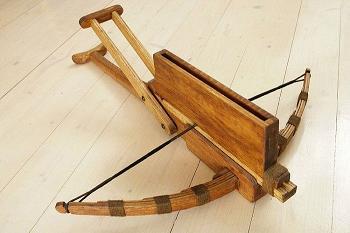