Developed in the 2nd Century A.D. (during The Han Dynasty), The Nu was the Asian version of the European Springald. It is documented to have used in battle (and mentioned in “The Art of War”), the weapons were somewhat larger than their European relatives. A stronger and more powerful windlass was used to create a somewhat greater kinetic energy as well. Steel sharpened bolts were much more preferred that wooden arrows. Often whole Regiments of The Lin Nu were used in battle (much in the same way a Volley Fire technique would be used by European Armies). Intricate bronze triggering mechanisms were developed in later models. The Nu was also configured into a Rotating Crossbow weapon (in the 4th Century), capable of firing 10 to 20 bolts at intervals. For their early attempts, The Nu was quite an innovation in Chinese warfare. They were also comparable to The Roman Scorpion. 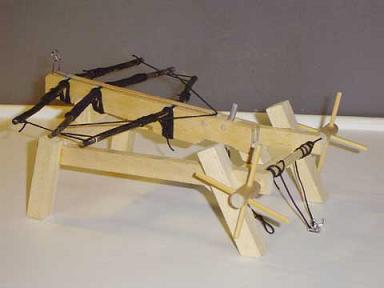