Located in Alsace, France, Bernstein Castle was built on the spot of a much older prehistoric defensive site by unknown builders. Some of that ancient wall was incorporated into the defensive Perimeter wall of Bernstein. The present castle was built possibly in the 11th Century. It was the hereditary home of The Counts of Dabo (local Aristocrats). Located some 1,800 feet up on a solid granite rock face, Bernstein consisted of a large central Keep and Manor House. It also featured some interior support structures. A Dry Moat (ditch) was once present (to support the already sheer rock sides of the mountain). Besieged in 1227, Bernstein was taken over by The Bishop of Strasbourg (and lived there until 1580).He constructed a small Chapel as well. After 1580, Bernstein went unoccupied and fell into ruin. Most stone was taken in the 1830s for houses. Very little was left of the original structures. The French Government moved in around 1978 to restored and preserve as much as could be saved. 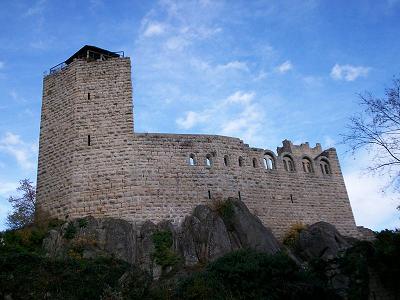