In a shared military history with Ancient Rome and it's policy of never allowing an Army to operate within it's City Limits (due to General Sulla's Coup of 81 BC), The Byzantine Noumeroi were an Elite Infantry Regiment allowed to garrison within The Imperial City of Constantinople. They were formed around the 8th Century AD under Emperor Michael III. Part of The Byzantine Army's ''Tagamata'' or Imperial Forces, they served as protection for The City should an Enemy ever breach The City Walls. They also served to control The Royal Prison and served as a type of Imperial Guard, when required.

Ranked lower than Excubitors, they nonetheless were highly regarded. They were moderately armored and carried Spear and Sword. Officers came from within the ranks of The Noumeroi, which aided in command and control. On of the primary ''peacetime'' Missions of The Noumeroi was to serve as Guards to all entrances of The City of Constantinople. It is estimated that at their height, there was perhaps as many as 5,000. 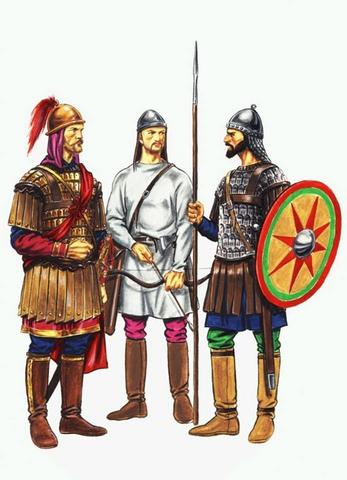