Much of the War Record of the British Westland Lysander Reconnaissance Plane is still a "secret". This sturdy and versatile "little" Plane operated many "behind-the-lines" operations, which played a crucial role in The Allied victory over Nazi Germany. Classed as a STOL (Short Take Off and Landing) aircraft. Capable of lift off from only 50 feet of Runway. The Lysander was a single-seater, 30-foot long and 50-feet wingspan Plane. The Lysander could achieve airspeeds of 200 mph and had an operational ceiling of 21,500 feet.

Capable of transporting loads of 1,300 pounds, they were armed with twin .303 Browning fixed Machine Guns. They could also carry either  (4) 20-pound HE Devices or (1) 500-pound munition. 9 variants were designed between 1936 and 1945. 1,700 were produced. They were used to transport Special Operations Troops and sensitive equipment behind enemy lines. In fact, through pure "luck", a Lysander was responsible for shooting down a German Bomber during The Evacuation of Dunkirk. England kept the Lysander in it's inventory until 1948. 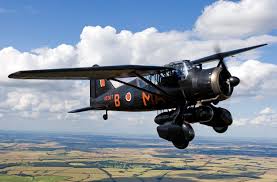