Also known as The ''Lifebuoy'' and ''Ack Pack'', The British No. 2 Flamethrower was a portable device used for anti-personnel activities by The British army, during World War II. Deployed in 1943, The No.2 was based on a similar WWI German version (The Wechselapparat, or ''Wex''). Weighing 65-pounds, The No. 2 was a spherical (doughnut) shaped device which held 4-Gallons of fuel with a Nitrogen propellant. A electrically primed ignition, inside a ''Gun Hose'' extension – sent a flame of propellant up to 120-feet. The No.2 could be used a total of (10) times before refueling. Over 7,000 devices were produced for Operation ''Overlord'' (D-Day) in June, 1944. The overall weight proved to be too much, with most designs discontinued by 1944. 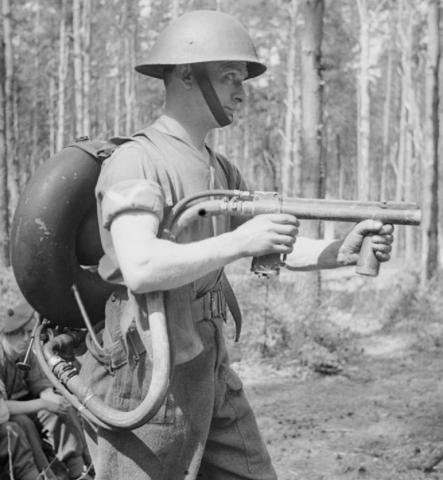