The Natal Hussars were formed as a Mounted Militia (Irregulars), of Settlers from Natal (Cape Colony) in 1865. They were a combination of two Militias, The Natal Hussars and The Greytown Mounted. Their primary Mission was to patrol The Border Regions between The Cape Town Colony and The Zulu Empire. The Hussars were formed into (2) Companies of (40) Men. Each Officer and Man had to purchase their own Uniform and Horse, but The British Army provided all weapons and support equipment. The Hussars wore a Dark Blue Tunic with Red Facing's. Although they used the standard British Army issue Pith Helmet, their undress or fatigue Hat was The French styled Kepi. They also carried The Army Martini-Henry Rifle. They functioned as both a mounted and (after The Battle of Isandhlwana in 1879) dismounted.

Assigned to Col. Charles Pearson's Column, The Natal Horse would be used as Screening Flankers to The Main Body of The British 24th Regiment of Foot. Only (5) survived The Battle of Isandlhwana. Reformed, they would go on to continue service in The War and later, as Border Guardsmen. They were disbanded in 1887. 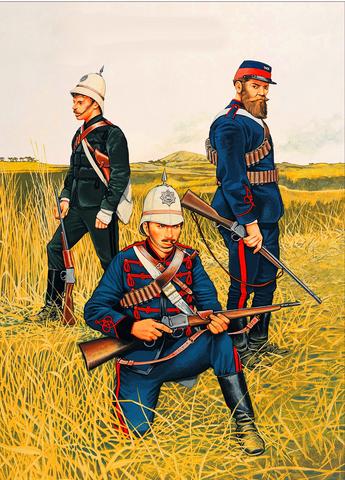