Nicknamed "The Buzzard", The Martinsyde F4 was designed in 1917, as a replacement for The Sopwith Camel. It was considered one of the best fighters of the end of The War. A single-seater, The Martinsyde was 25 feet long with a wingspan of 38 feet. Capable of an impressive airspeed of 132 mph, it had an operational ceiling of 21,000.
Equipped with twin fixed Vickers .303 Machine Guns, it had a reputation quick climb capabilities. Over 1,450 were built for foreign sales, but oddly only 370 were pressed into British War service. The Martinsyde was used into the early 1930s as a Training plane. 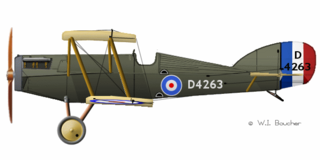