One of The Hawker Aircraft Company first Jets to include a swept wing design and the inclusion of a Turbo Jet Engine, The Hawker Hunter Fighter Jet was deployed with The British Royal Air Force in 1954. Prototypes broke The World Air Speed Record in 1953 by achieving over 700-mph. Over 1,900 were produced during their Contract run. Crewed by a single Pilot, The Hunter was 45-feet in length with a swept wingspan of 34-feet. They were powered by a single Rolls Royce Avon 207 Turbo Jet Engine, with a 10, 145 IBF Thrust. At Mach 0.94 (over 700-mph), The Hunter could achieve an operational ceiling of 50,000-feet. Armed with (4) 30mm Wing Guns, The Hunter also could be deployed with Pod Systems featuring up to (32) Hispano 3.5-inch Rockets or (4) 2.68mm Rockets (underwing mounted). When deployed with Ordnance, The Hunter could carry up to 7,400-pounds. The Hunter remained in The British inventory until 1972. Several Countries imported The Hunter for their Air Forces, with the last being used by The Chilean Air Force in the 1990s. 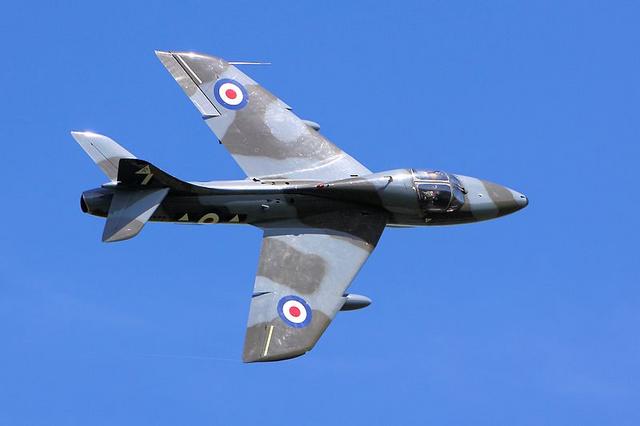