The British ''H''-Class Submarine was among the most popular and deployed in 1915 by The Royal British Navy during World War I. The Class was produced to counter German U-Boats operating in The English Channel. In addition to counter-mine warfare, several Vessels operated in the Open Sea and off The Coast of Germany as well. (33) were produced during The War. The Class would continue in Home Defense after The War, but by the start of World War II, The ''H''-Class was deemed obsolete. Several were still retained for Submarine Training Ships. None existed by 1946. The ''H''-Class was 400-tons displaced. They measured 150-feet in length with a Beam of 15-feet. Crewed by (22) Officers and Men, The ''H''-Class was powered by (1) Diesel Engine and (2) Electric Motors. Typically, The Class could achieve 13-mph on the surface and 12-mph submerged. The Class supported (12) 18-inch Torpedoes. Later Models (1917), also deployed with (1) 6-Pounder Deck Gun. 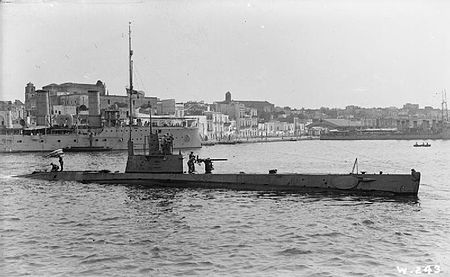