A feature incorporated in Medieval castle building, it served as a defensive method. A castle entrance was normally it's weakest spot. The entry point was made narrow and at a sharp left or right turn. The purpose was to slow down an enemy advance and to make the used of battering rams too difficult. Thus cramped and bottlenecked - attacking troops fell prey to burning oil, boiling water or arrow fire concentrations. Bent Entrances were a common feature in many Middle Eastern castle building techniques. As such many European Crusaders incorporated them into their castle building plans as well. Krac de Chevaliers and Belvoir Castles are classic examples of this type. 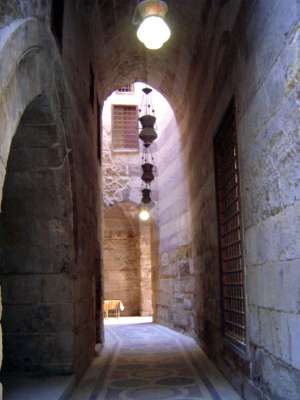