The Battle of Natural Bridge was fought near The Town of Woodville, Florida on March 6, 1865. It was one of only several Major Battles fought in The State (which was sided with The Confederacy), during The American Civil War of 1861-1865. It would be among some of the last fought during a War that would end in shortly 1 month.

Much of Florida's Volunteers to The Confederate Army had long since been taken to serve in other Major Armies of The South, during The Civil War. Most States in The South could barely maintain Home Guard and Militia Formations for any form of protection against The Federal Armies. By 1865, there were very little left by way of defensive Military Units in Florida. Federal Forces had been occupying Florida (in proxy) since 1863 (mostly having taken control of most of Florida's Forts along it's Coasts). The occasional Expedition into the State were met with mixed results from Militia (most of these being Invalids or Old Men). The main goal was for Union Forces to take The State Capital in Tallahassee. A Confederate Force had raided several Supply Depots and Federal Regiments (mostly African-American), were sent to locate these Confederates and eliminate them. The US 2nd Florida Cavalry, 2nd and 99th US Infantry marched North towards the outskirts of Tallahassee (The State Capital).

As said, Confederate Forces were lacking. Most of these ''Raids'' were by Home Guard Militia – performing these actions as a harassing tactic. They could not have really held against the better equipped Federal Forces. Near Tallahassee, elements of (4) Confederate Artillery Batteries as well as a small Cavalry Detachment and of course, The Militia, gathered near Woodville (several miles from The State Capital). They destroyed 1 bridge across The St. Marks River, but left the other – known locally as ''Natural Bridge'' – for it's creation by natural forces and not a man-made structure). It was hear Rebel Forces created a breastwork and waited for The Federals. Hearing of their approach several hundred College Students (without uniforms), shouldered Muskets and came to the aid of The Rebel Line.

The Federals advanced to within 500-yards of The Rebels, and were met with cannon fire. Still, they advanced to within 200-yards and were met with withering musketry. They would regroup and again charge. Failing yet again, another was made. This time, both Forces came close enough for hand to hand combat. Still determined, The Rebels held. A total of three charges would be made by The Federals. In the end, they retreated, feeling that Tallahassee was not worth the taking. The Federals counted 50 killed and The Confederates 120. As such, Florida's State Capital is the only Confederate one to have never been captured or occupied by Union Forces. The College Students who came to the aid of The Southern Forces came from an Institution that would eventually become Florida State University. In honor of their Service, all College Reserve Officer Training Units (Army and later Air Force) are allowed to place a Battle Streamer on their Colors......from The Civil War (one of only 4 in The Country that are so allowed). 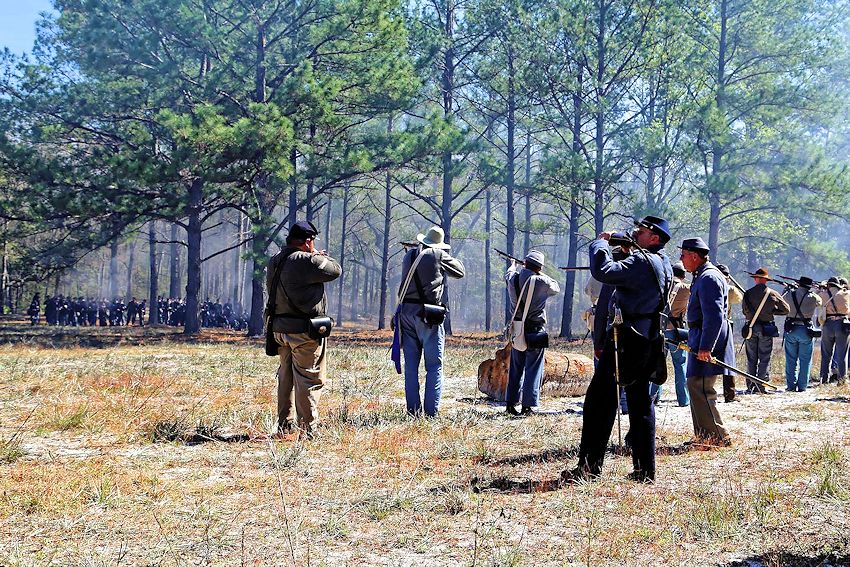