Banner of The Commodore of The Japanese Navy

As we have seen, most Senior Battle Commanders of Armies and Navies through The World and History, identified themselves with some form of ''Personal Command'' Flag. Such use of Flags was very much a part of most National Navies Traditions and History (and is still used as such). While the use of The Imperial Nation Colors of Japan was regulated to The Emperor of Japan, with that Nations modernization into a 20th Century Naval Power, authorization was given to allow only the highest of Military Commanders to adopt their Personal Colors.

Starting in 1914 and continuing on through the end of World War II in 1945, The Commodore of The Imperial Japanese Fleet used a modified form of ''swallow-tail'' Flag as his Personal Ship Borne Flag. This Color was a White Field. A Full Canton was placed by The Hoist which incorporated The ''Rising Sun'' with radiating ''rays'' (which was based on The Japanese Army and Navy ''Battle Flag''). The overall symbolism of The Commodore Flag was taken from The Japanese victory over Imperial Russia during The Russo-Japanese War. The use of such was discontinued after 1945. 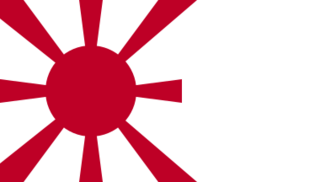