A Germanic (Austrian), Paramilitary Force which existed between 1920 and 1936, The Heimwehr (''Home Guard''), were a Nationalist Organization – similar to The German Freikorps. The Heimwehr opposed Democracy, and were an example of early Germanic Socialism (which developed around the same period as Germany's SA Political Party did). By the time The Heimwehr had been able to secure a minor hold on Austrian Politics, they were absorbed into The German Nazi (Socialist) Party (1936). While have no ''official'' Flag or Banner initially, The Heimwehr would adopt a Flag based heavily of The German SA Party of the 1930s. This was a Red Field, with a White Circle (centered). The Black Swastika was placed inside same with a White ''Toten'' (Skull). (4) radiating Black Bars crated a quartering in The Field.

Each Bar featured symbolism showing the ideological similarities between The Austrian and German Political Parties. These were The Sturmstaffel (SS) insignia, Maltese Cross and (and in an unusual, somewhat ''anti-Socialist'' imagery – Golden Crown (alluding to The Austrian Crown). The Flag would vanish from use as National Socialism was completely adopted by The Austrians. 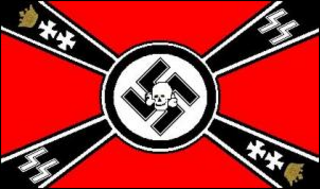