The South Australian Mounted Rifles were a Military Formation of Great Britain – deployed to South Africa during The Boer Wars of 1900. The Colonial Force consisted of over 275 Officer and Men. These were Mounted Infantry (consistent with Dragoons). The Rifles fought at The Sieges of Johannesburg and Pretoria and later at The Battles of Diamond Hill and Belfast (suffering high casualties). They would be among the last Australian Forces to leave South Africa after The War (1901) The Rifles wore khaki tan (Brown Trim) with Carabiner (Bush Hat). The British Lee-Enfield Carbine was a popular Cavalry Rifle was a variety of Revolvers. The Rifle also carried Sabers. 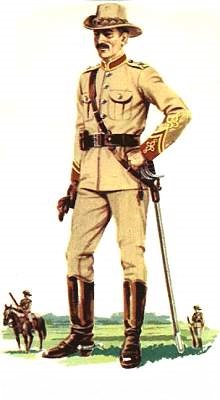