Attributed Arms were Heraldry (or insignia), designed for a person who did not (or that there is no proof) – that the person was real or ever lived. In some cases, the “person” or historical “figure”, MAY have lived, but never issued such “Patents”. These Attributed Arms began to develop around the 15th Century. Often created by the “imaginative” Herald – examples of such would be King Arthur, Roland, or even religious figures (Christ). Often created for Libraries and Universities, they were made to inspire and not ever meant to be taken as “authentic”. In some cases, if a particular Nobleman (or woman) had a Patron Saint – they would commission their “Tomb Effigies” or even “Tomb Chests” to have these “fanciful” pieces added (much to the confusion of future Historians!) 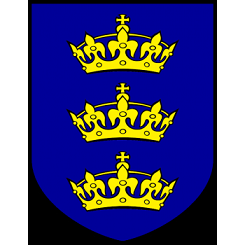