These 17th Century Ships were built and used quite extensively in Dalmatia and Venice. Similar to The Galleon-Class of ships, Argosy Ships featured much larger hulls to accommodate larger amounts of cargo. They seldom were used in the "International" Trade, and saw service in local waters or portions of The Black Sea and Mediterranean. They were poor at handling and often had small crews. This made them susceptible to Pirate attack. Quite large at 2,000 tons displaced, Argosy's ranged from 75 to 140 feet in length. They featured both twin and triple Masts (normally using a Square Rig System of Sail). 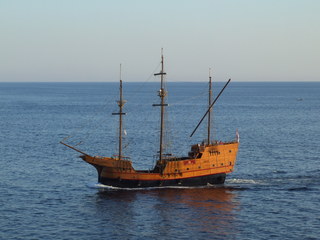