General John Sullivan was an American Patriot commander who not only commanded Forces at The Siege of Boston (against The British), but of the ill-fated Invasion of Canada by American Forces. Later defending Long Island, Sullivan was captured by British Forces. Paroled, he would go one to continue fighting through The War. His personal Colors consisted of 13 Red, White and Blue Stripes on the entirety of The Field. The Upper left Canton featured a White Field with the iconic coiled rattlesnake and the phrase ''DON'T TREAD ON ME”. 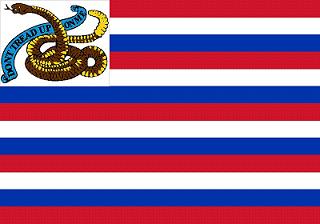