Heavily debated in use, Abatement's were symbols applied to a Coat of Arms in Heraldry, which reflect a particular “act” seen in disapproval. For example, the act of convicted Raping, Lying, Boasting, Drunkenness, Killing Prisoners, Seduction, Refusal to follow through with a Challenge and Adultery – were all examples of censor. Often (upon conviction), a series of pre-selected patterns and shapes were applied to the Convicted Coat of Arms. These were “web-like patterning” called a Sanguine (Hatching). English Heraldry claims “no such patterning” - but it is evident in Germanic and other Middle European Countries. 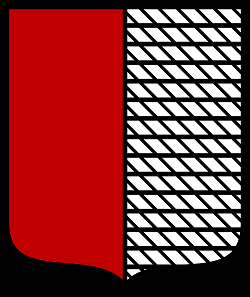