Yes, (with all respects to Stephen Sondheim)  there may have actually been a ''REAL'' Sweeney Todd! The original character appeared in an English Penny Dreadful Novel in 1846 called A String of Pearls. In it, we meet Ben Barker. A mild manner Barber-Surgeon, he and his wife and baby made a modest living in Fleet Street (a somewhat lower middle-class neighborhood). His attractive wife falls under the lustful eyes of one Judge Turpin (a corrupt Magistrate). Shunning his advances, Turpin (undeterred), arranges for Barker to be falsely imprisoned (at Botany Bay, Australia  of all places). The English version of The French Hell Hole - known as Devil's Island - Barker is driven mad in the evil place. His only goal in live is to escape the prison confines and make his way back to England  and revenge. Many years pass. Barker (taking on the alias of Sweeney Todd), manages somehow to escape (on a slave labor ship by falling overboard with a small makeshift raft). Found floating (near death) many weeks later by a passing Merchant Ship (by a sharp eyed young Lookout named Anthony)  Sweeney makes his way back to London  and his plan.

Unknown to Sweeney, his daughter is grown up and the Ward of the Judge (who has his own plans for her). Sweeney's wife (driven mad in a suicide attempt) is a dim witted prostitute. Todd sets up shop as a Barber-Surgeon again with the help of an equally sinister Boarding House Owner (Mrs. Lovett). The two conspire to kill Gentlemen wishing shaves (via a cut throat by a straight razor), all the while stealing their possessions and turning them into Meat Pies (for cannibalistic enjoyment by unwitting customers). The rest of the story, you may know. It has been made into a movie at least 6 times since 1936 (and a VERY successful West End Stage and Broadway Musical). What is NOT general knowledge is that it may be a somewhat TRUE story. French Police have a file of similar grisly murders being committed by a Barber-Surgeon in 1800! Their case was known as The Rue de La Harp Murders. It is thought that the writer of A String of Pearls may have read the newspaper accounts and used it much later.Although there is no name listed in Newgate Prison of one Sweeney Todd (or a business owner on the actual Fleet Street), some Historians point to a Case that had some similarities. Famed English Novelist Charles Dickens alluded to it as well. Unfortunately many of these documents have been misplaced (shades of The Whitechapel Ripper!)................... You be the Judge! 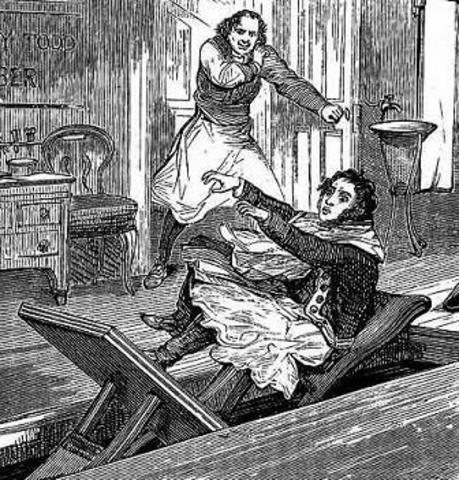