A Group of friends (traveling in separate cars), encountered something strange in The Yukon (Canada) Territory on December 11, 1996. Something that they will LIKELY never forget. At around 8:20 P.M. - the group was traveling in the lonely and somewhat desolate upper Yukon wilderness. Mountains and hills (and plenty of darkness), was all they encountered. That was until a sudden and massive Light appeared over the forward car!. The darkness was lit up as if it where day . Stopping their cars, the group got out and looked up. They saw a large Stacked-Saucer shaped Object traveling around 1,800 (estimated feet) above them. The Object had many smaller windows and lights of Red and White . It was not rotating. The group watched as the Craft moved over a small Lake nearby. It shined what appeared to be some sort of light beam (from underneath) onto the Lake's surface. The group watched as the Craft slowly began to attain a higher altitude and disappeared from sight. Upon arrival at their homes, they contact local News. Although no proof of their encounter (other that what they saw) exists, it should be noted that Lights WERE reported over various locations at around the same time as the group's sighting. 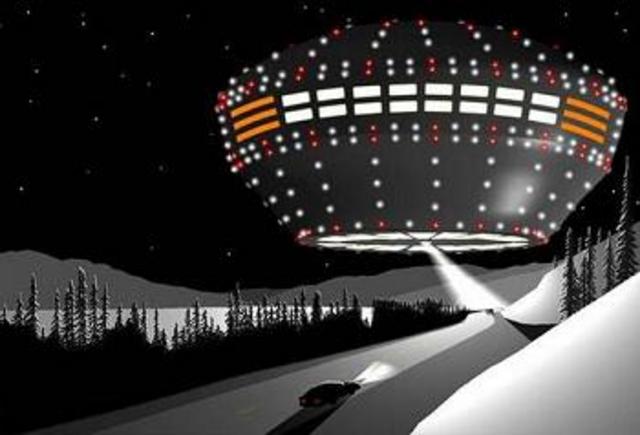