Another famous Contact Case, it occurred in Alpes-de-Haute-Provence, France - on July 1, 1965. Farmer Maurice Masse was working his fields that morning, when suddenly a large spherical Craft, slowly descended from the skies. A series of "struts with pads" extended from underneath - as it proceeded to touch down on Masse's field! Transfixed, Masse noticed the Craft had no windows or openings - save for a single doorway which opened soon after the Craft landed. Masse claimed two Beings exited the Craft. They were described as being around 4-feet tall and had large heads. The Beings were dressed in silvery coveralls.

As soon as The Beings "saw" Masse watching them, one of the Beings withdrew from his coverall a tube-like device and "pointed" it in Masse's direction. Masse stated that a "beam of light" came out of the device. He was instantly paralyzed. Unable to move, Masse could only watch as The Beings proceeded to take plants and soil samples. Masse stated that one of the Aliens "spoke with his mind" to him. The Being told Masse that he would not be harmed. After several minutes, The Beings went back inside the Craft. Slowly, the Ship lifted off and flew up into the sky. Almost immediately, Masse regained his ability to move. Masse reported the encounter to local Authorities. Photos taken of three burned circles where the Craft landed, were taken. The Farm is still in The Masse Family. 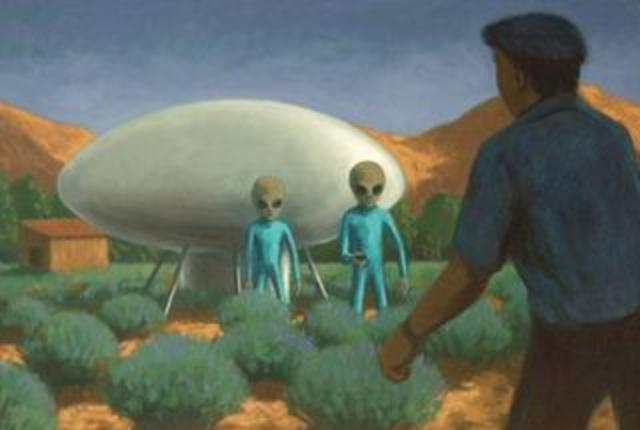