The Talavera Air Base Incident

This incredible Incident happened on November 12, 1976 - in Badajoz, Spain. A routine Spanish Army Patrol was working the perimeter of Talavera La Real Air Base around 1:45 a.m. The two man Patrol heard a loud static-like crackling in the nearby woods. Soon the sound turned to a high pitched whistle. Unclear as what they heard, as they pondered, suddenly a bright White burst into the air over the woods ( lasting about 15 seconds). The soldiers requested a guard dog unit, and the three soldiers a canine went to investigate. Upon arrival at where they assumed the noise had come from, the advancing soldiers saw a glowing green light. They soon saw the source. In front of them was a 6-foot tall "Being". The creature appeared to be "made up" of hundreds of small lights. It wore a type of helmet. Further, the men noticed no hands, fingers or feet. Sending the canine toward the Being, within several feet the dog began to act sick. The dog attempted this several times before returning to his Handler.

The dog began to circle the men (a sign of impending danger). One of the soldiers tried to advance. He later claimed he felt light headed and nauseous - passing out! The was too much for the two remaining soldiers. The men fired around 50 rounds into The Being (without reaction). The creature simply went "dim" and blinked out of sight. The soldiers made their report to their Commander. An investigation of the scene yielded no evidence. Not even spent ammunition cases! Medical Authorities determined the soldiers shared a mass "hallucination". 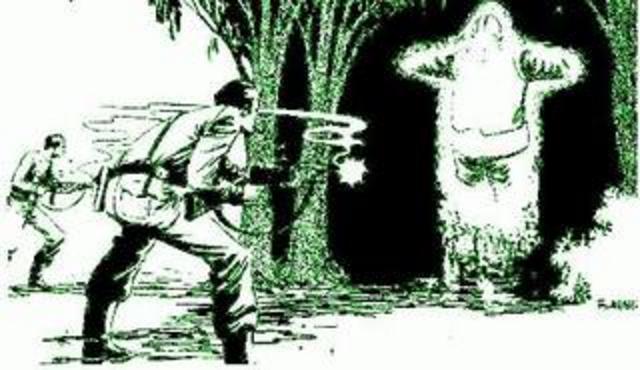