As we have seen with ‘’Cattle Mutilation’’ Cases, many theories abound (from secret Government experiments to Extraterrestrials harvesting organs for nefarious reason). It is The ‘’Alien Hypothesis’’ we’ll examine with a very strange and frightening event that happened near Potosi, Brazil in 1968. A local Sheep Rancher had problems in the past with Predators coming into His Ranch to feed off His stock. He had tried various methods to control this issue. The Rancher installed a heavy weaved net to completely cover (enclose) His prized flock.

One night, He hear His Sheep crying in distress. Grabbing His weapon, The Rancher went to His pen. As He looked thru the net, with His flashlight – he saw a very strange sight. Expecting some type of wild dog or feline, He ‘’saw’’ a ‘’small, Humanoid Being, no bigger than 3-feet in height’’. The Creature was wearing ‘’odd clothing and had what appeared to some sort of backpack on it’s back’’. The Being wore some type of face shield. But the most alarming part of the encounter – was that The Being was carrying a long curved hook-like tool. The Being had a dead Sheep at it’s feet and had – according to The Rancher, disemboweled the poor animal.

The Rancher made ‘’eye contact’’ with The Creature, who seemed ‘’alarmed at being seen, but not overly worried about it’’. ‘’It’’ placed the entrails into it’s pack. The Rancher fired a shotgun round into the air, which seemed to cause The Being to ‘’move very fast’’. Touching the strange hook-like tool to the netting over the pen, The Farmer relating The Being just disappeared and reappeared ‘’floating above the enclosure’’. The Creature then ‘’floated up into the sky at a very fast pace – into nothingness’’. The Rancher later stated that He found close to 40 dead Sheep, all with their entrails missing ONLY. The Rancher also later learned that several other Ranchers in the Region had similar experiences over the last several years. After 1968, the strange Being was never seen or reported again. In all cases, no sightings of UFOs were made, leading Investigators to believe such ‘’Craft’’ were quite possibly ‘’cloaked’’ (made invisible to sight). 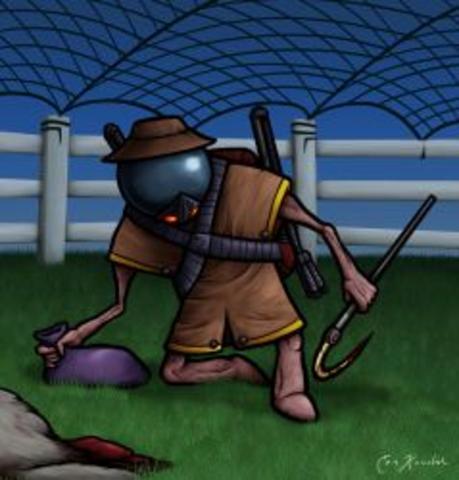