One of the "Darker Chapters" of World History, ''The Nuremburg Laws'' were a series of Regulations enacted by Germany's National Socialist Party in 1935. Aimed at creating a "Eugenics based" Society of "pure blooded" Germanic peoples, The Laws were aimed specifically at German Jews and later Romania  (Gypsy) and those of African descent. The Laws were broken down into two categories. The first was "The Law for The Protection of German Blood" and the second, "The Law for The Protection of German Honor". They forbid the marriage or extramarital relations between "pure blood" Germans and any "non-German" peoples. It also forbade any German females under 45 years from being employed in a Jewish Household. The Laws also created the now infamous "Jewish Yellow Star", which were forced to be worn by Jews to "identify" their "status".

The "Theory" of a Eugenics based Society was not a German one. Such beliefs were really centuries old and stretched into many Societies. Germany based it's Laws in part on research from American Eugenicist Harry Laughlin - who had used statistics to establish to the US Government the "inferiority" of African-Americans from 1934 to 1937. Sadly, these "statistics" would slow African American service into it's Air Fighters Program. The Nuremburg Laws were used in concert with other established Regulations in Germany. These included a 1933 Jewish Business Boycott and the removal of Jews from German Government Offices. The full enactment of The Laws waited until after the 1936 Summer Olympics. This was widely seen as a form of Nazi Propaganda aimed at "showcasing" a "Superior Race" in competition, made so by The Laws (and others). The Laws would lead to other more insidious Laws and enactments each which would push The World steps closer to World War. 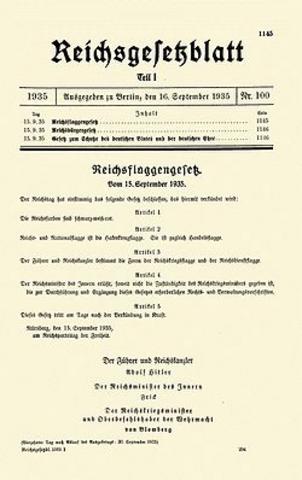