From December of 2018, a Shore Fisherman was ''treated'' to an unusual Light Show which apparently had nothing to do with your average Meteor Shower or ''string'' of Satellites whizzing through the sky. Cape Lookout is located on The North Carolina Coast (US) and is often used by Shore Fishermen, who cast their lines into the tide. Early morning is the best time, for early feeding – close shore fish of all kinds. It was around 4:30AM that The Fisherman noticed a single ''bright Red Ball of fire'' appear over the growing horizon. The ''Ball'' made no noise and simply ''sat there'' – occasionally moving side to side. Soon the ''Light'' was joined by another – and then two more. The Objects began to for various ''shapes'' as if ''flying in formation''. The Fisherman was quite sure that these were not Aircraft. The Objects made ''sudden moves'' totally inconsistent with what would assume a ''normal'' aircraft would make. After an amazing 20-minutes, all four Objects suddenly ''winked out of sight''. Luckily, the Fisherman was able to take a Cellphone video clip of a portion of the Event. Featured on Regional News Media – the ''story'' did not make National News, and quickly disappeared. 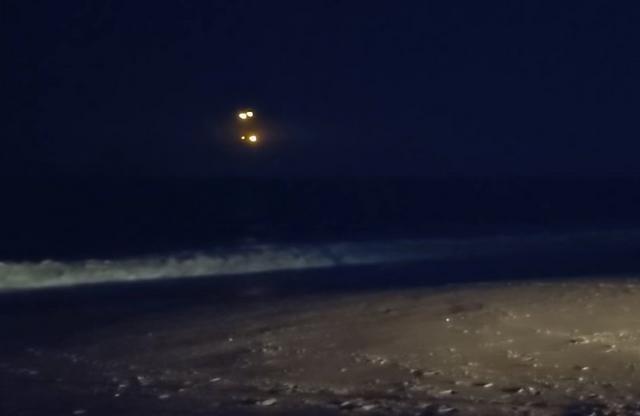