Occurring in Mobile, Alabama (US), on February 3, 1983, some 30 to 40 persons observed a strange Craft. The initial Reporting party was driving down a State Route Highway around 8:00 P.M. A loud explosion was felt (from the skies directly above the vehicle). Very quickly following, a strange vibration was felt throughout the car as well. Unsure of what was happening, the reporting Party pulled over to the side of the road. They noticed a bright white Light , coming from the skyline to their front. Thinking it was possibly a helicopter, this though was soon changed as an immense Craft estimated to be around 200 feet wide and roughly 80 feet tall appeared. Long telephone pole -type extensions could clearing be seen on the exterior of the Craft.

Great detail with regards to windows, doors and other unknown items'' were also noted. The Party witnessing this phenomenon also noted a loud whirling noise (like a high wind) was present. Stopping above the vehicle, the persons inside felt a strange calm (no panic or fear). They all fell asleep and claimed to have awoken inside the Craft. They were examined by Beings similar in description to a typical Gray Being . The Party had no recollection of any tests conducted on their persons. After an unknown period of time, the group woke up back in their car. Several stated they could see the Craft leaving from their location. Several hours had apparently passed. Real or fake ? 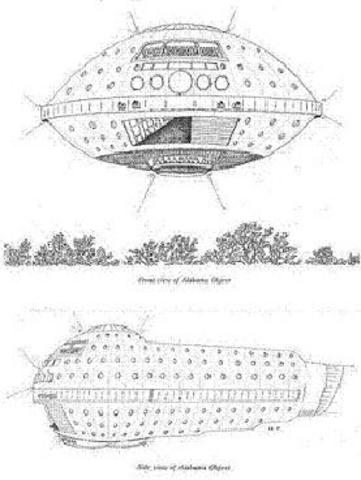