The Legend of The ''Flying Dutchman''

A Sailor's Ghost Story going back to at least the 18th Century (by some accounts), The Legend of ''The Flying Dutchman'' is as enduring as The Sea's History. Most seafaring Countries have their haunted ship stories. The Dutchman story (having been popularized by most Mediums, Opera and EVEN several Film adaptations)  is timeless. To see The Dutchman was a bad omen. To have contact with her was doom. Citing an 1821 account of The Dutchman, the legend (or curse), goes as such: ''Sailing from Amsterdam, Captain Vanderdecken was a determined Ship Master. His Brig, ''The Dutchman'' - was well known. Declaring he could sail 'round The Cape of Good Hope in record time, he ran into gale force winds that greatly hindered his time. Storming The ''Dutchman's'' decks, he cursed the winds (and God himself). Vowing if it takes all eternity , he would remain at sea and n'er enter a Port or Harbor until he completed his boast!'' Therein lies the curse. He and his Ship would sail for all eternity, never being allowed to enter Port until he could complete his mission (which the winds would NOT allow). Any ship that came across The Dutchman would have bad luck on their voyage. Further, (as some of the stories go)  The Dutchman will try to stop a ship begging them take letters and notes for them to shore (written to long dead relatives and friends). Any Captain foolish enough to undertake this favor, would doom his crew and ship to founder (and sink!). Yet another version . This version has our Captain having falsely accusing a true love of infidelity  brutally murders her (stabbed through the heart). Escaping to his ship, he sails away (escaping justice). Cursed to sail the seas until the end of time, he was allowed to visit a Port once every 100 years (for a day). His mission is to find a true love to sacrifice herself (in exchange for his soul). Some have claimed to have seen The Dutchman as late as the 1940s. 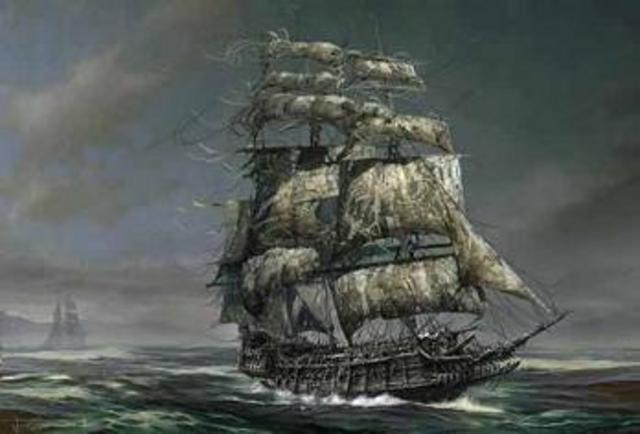