This unusual photograph was debated greatly when it was first published. In fact, The Costa Rican Government was accused of hoaxing it. Why would a little Country do such a thing Possibly because it WASN'T a hoax! On September 4, 1971, The Costa Rican Government had deployed a Mapping and Cartography Airplane to take high altitude photographs of Costa Rico and it's surrounding smaller land masses (islands). Operating at around 10,000 feet, (over Lago de Conte), the Military aircraft had fixed photography devices along it's underside, on it's wings and a front and rear mounted system as well. With all cameras focused in a downward position, the Pilot flew in several straight lines (back and forth) to cover maximum area. It was a routine flight that lasted about 1-hour. The Pilot landed his aircraft without incident and ground crews unloaded the photographic equipment for development.

What the Technicians found on the film and pictures was astonishing. On one of the Pilot's passes, he accidentally captured what appeared to be a large, Disc-shaped Object - flying at around 8,000 feet. The Craft was speculated to be around 600 feet in diameter!. Further, checks of Air Control and Air Defense Radar logs, showed NO CONTACTS that day (other than routine flights). The Mapping Plane was the ONLY military flight in the air (at the time). Within several weeks however, report began to come in from Farmers in the outer Regions of the Country (where the Mapping Plane took the photograph). They reported strange lights and strange Objects later in the day. Reported actual flight film was never released to the Public, and the series of photographs only came to light within the last 15 years! 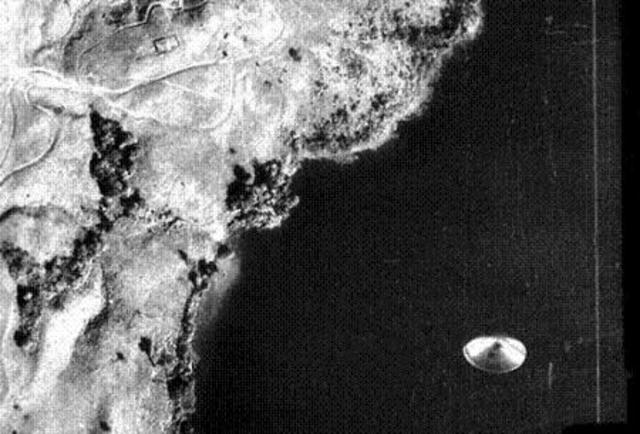