A Jefferson County Kentucky (US) Police helicopter had an encounter with something quite frightening on February 27, 1992. Around 12:30 A.M. - the local Police helicopter was on routine patrol when they received a call from ground dispatchers of reports of strange lights . Heading to the location given, the Pilot and his observer noted a Egg Shaped craft hovering some 1,000 feet in the air! The Object was glowing in a slow pulsating, white pattern . The helicopter began to slowly circle the object (estimated at being around 50 feet in diameter). Suddenly, the Object shot 3 basketball sized orbs of light towards the Police helicopter. Fortunately the Pilot was able to take evasive action and elude the balls of light. After the third shot the Object simply blacked out and vanished. Later, the encounter was verified by a Police Patrol car that claimed to have witnessed the attack . When reported to local Military Authorities, they declined to investigate. 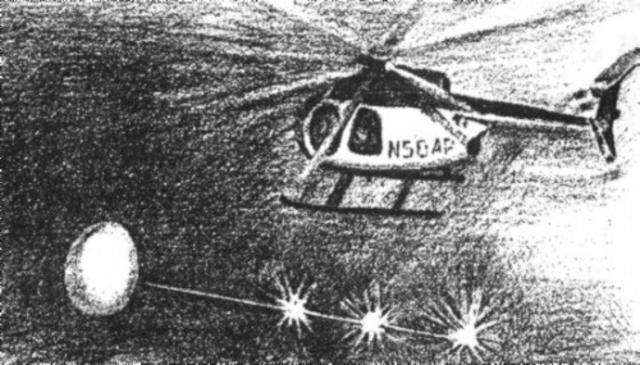