This strange incident happened during The War in Southeast Asia (Vietnam), on June 15, 1968. I t may very well be an early encounter with possible hostile forces the Alien kind! The HMAS ''Holbart'' was a Royal Australian Naval Destroyer assigned to coastal defense duties off Vietnam. At around 9 p.m. - radar confirmed several incoming Objects from a low altitude approach. They did not match known rocket or missile trajectory. The NVA (Army of North Vietnam) did not have aircraft in the area (as was confirmed by USAF ground sources). A further check of USAF ground based radar confirmed the in-coming Objects as well. Battle Stations was sounded and defensive measures undertook. Sailors manning their Observation Posts on deck scanned the skies for visual confirmation of the Objects. USAF Fighters however, could not detect and in-coming Objects (despite of what ground radar was determining). By 9:30 p.m. Danang AFB reported the Objects were increasing speed and heading towards HMAS ''Holbart''.

The following is officially what occurred. Multiple enemy helicopters attacked The ''Holbart'' which sustained moderate damage to it's deck structures. 5 crewmen were killed in action. The enemy helicopters were fired upon by not only The ''Holbart'' - but by several USAF Fighters. The helicopters were chased off and ''Holbart'' eventually made Port for repairs (which were documented). What ACTUALLY happened (as was attested to years later by crewmen and Port Personnel brave enough to speak) was that several glowing balls of light buzzed the deck of The ''Holbart'' . The resulting close contact with an unknown heat source of immense strength melted and damage much of the super-structure of the ship. The crewmen who were killed were melted or sustained intense heat exposure injuries as a result. The Case was quickly buried and the story of NVA Attack Copters listed as official . HOWEVER, The NVA did not possess Attack Helicopters (and only a limited amount of Chinese MIG Fighters). Years later (again), Hanoi (Vietnam) stated that they were NOT operating in the area at that time. Some state that the incident was a result of a friendly fire mishap. If so why would the (now older) crewmen invent such a story. Like other tales told , The Australian (and American) Governments threatened jail to ANYONE who told the Truth . 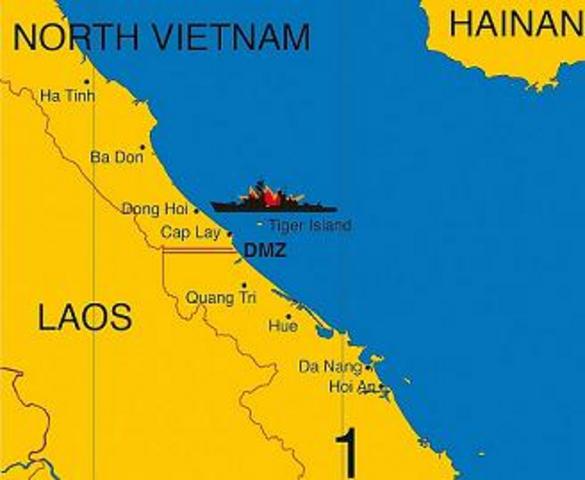