Perhaps The ‘’Crown Jewel’’ of cheesy, ‘’B’’-Movie 1950s fare – 1957s ''The Giant Claw'' as yet another of Columbia Studios attempts to lure Drive-In Audiences. Absolutely NO redeemable special Effects, the Main ‘’Monster’’ resembles a giant ‘’Buzzard Puppet’’ (literally). On occasion, even the strings are visible. The Plot was ludicrous, cashing in on the popular real-life UFO ‘’Wave’’ (Reports), cropping up all over The World. When an Interdimensional ‘’Giant Bird Monster’’ makes His way to Our World, ‘’It’’ is mistaken for a UFO by Military radar the World over. After several Jet Fighters are destroyed, The World Governments finally ‘’see’’ The ‘’Buzzard Puppet’’ and ‘’invent’’ a special Proton Beam to zap The Creature dead, sending it sinking into The Ocean. So poorly reviewed it became an immediate flop, ‘’The Giant Claw’’ is still seen as a popular Cult Film for Fans of The Genre. 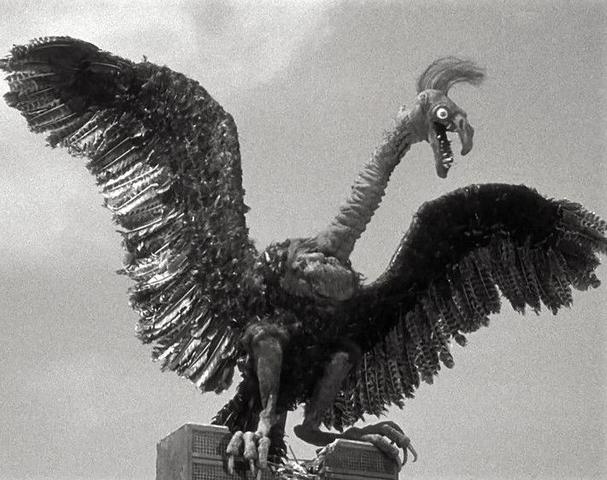