This was a highly publicized UFO occurrence that occurred on September 3, 1965 near Exeter, New Hampshire (US). Over half a dozen citizens (along with Police Officials) reported the unusual incident. At 2 A.M. - on the day in question, a Serviceman was hitchhiking home on leave. Walking down a lonely road on the outskirts of Exeter, he noted a strange light over a local Farmhouse (of which the man knew the owners). As he watched the strange light, it began to move towards his position. The Object (described as a glowing, cylindrical shaped Object), hovered directly over him. Running, the man saw a car coming and got it to stop. Telling his story to the driver, he asked to be taken into Town to report the incident to local Police). The Police sent a car to the Farmhouse and made contact with the owners. Asking if they had had any problems that night, the owners said that a strange light had been hovering over their Farmhouse. They said the Object was White with flashing Red lights . The investigating Officer discounted their (and the young man's story as a prank ). Going back to where they parked their Patrol car (up the road from the Farmhouse), the Police Officers said they noticed that a corral full of horses were acting scared.

Suddenly, the Object appeared again over them! At first, the two Officers thought it was a Military Aircraft (like a B-52 Bomber). However, the more the observed the Object, the less it resembled a plane and more like something else . After several minutes, the light blinked out and was gone. After several more minutes, the Officers stated that a B-47 Medium Bomber flew overhead in the direction of where the Object had winked out . The two Officers went back to Town to file their report and notify the US Military. Other reports from other Citizens came flooding in to the Police Station. Stories of lights and objects (very similar and consistent with other reports), circulated. The incident made local and National News (with interviews abounding). The Official Military report was that Yes, one of out Bomber's were flying nighttime training missions over Exeter and nothing else! A year later (seeing that the excitement of the incident had still NOT died down, the US Military somewhat retracted their statement, stating that they had no ideal WHAT the People of Exeter saw! 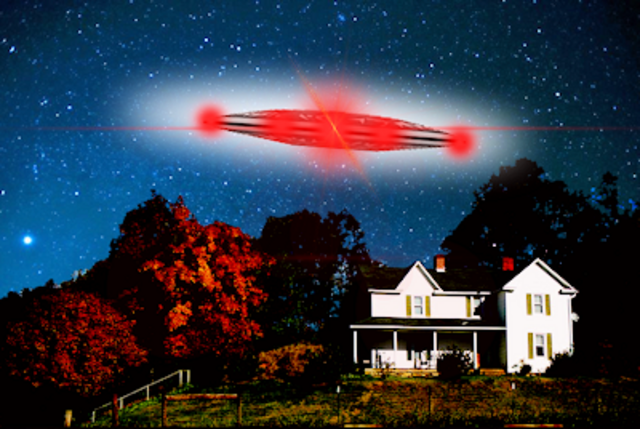