This Case relates to Polish Farmer Jan Wolski who lived in the remote Village of Emilcin, Poland in 1978. The incident garnered so much Local attention then, that The Nation of Poland actually erected a Monument to The Event. Wolski claims that while riding in His Cart, ''Two, 5-foot tall and Green'' Beings jumped into His Cart. The ''Beings'' spoke to him in a language that while He ''did not understand vocally'' could ''understand them in His Mind''. The Beings took Wolski to their ''Ship'' (described as a Saucer-Shaped Object suspended on several Poles or Legs''. Wolski stated He felt ''immobile'' and was taken by The Being inside. His clothes were removed and The Beings ''examined Him''. No invasive tools were used. Wolski further described the interior of The Craft as being ''White and Grey, with all other components such as tables and chairs ''merged'' as if they where ''part of The Ship''. The Being's offered Him food (but Wolski did not eat). Wolski woke up several hours later on His Cart. He stated He saw ''The Craft hovering over Him, which slowly lifted into The Sky....disappearing''.

Going Home, Wolski told His Family and Friends of the encounter. No one seemed to doubt Him. Investigating the area where the encounter was said to have happened, People found that the ''Grass appeared to have been flattened into a circular pattern''. No one saw any ''Craft'' but earlier that Morning, a local child stated that She had seen '' a glowing Object fly over Her Family Barn''. So believed, The Village of Emilcin petitioned The Polish Government to erect a Memorial to the ''Otherworldly'' Encounter. In 2005, one was placed at The Site of The Incident. Investigators made a recording of the interview made with Wolski. This was kept private until the year 2000. 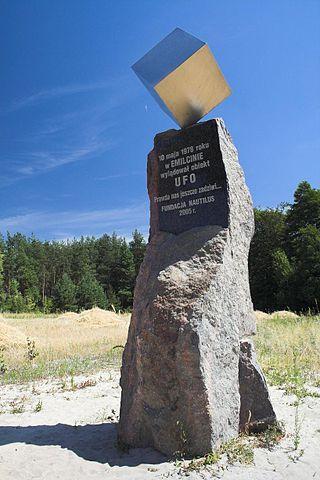