Happening in Livingston, Scotland on November 9, 1975 Forester Robert Taylor had an encounter he will never forget. It was around 10 P.M. And Taylor was doing his rounds (checking for possible illegal hunting activities). Walking through the woods with his dog, he hears a strange humming noise off in the woods. He went to investigate. He went farther into the treeline and saw what he described as a large Spherical Object sitting on the Forest floor. He noticed what appeared to be windows and a series of walkways encircling the mid-section of the Object . Taylor said he could feel heat even from his position (roughly 300 feet away). Suddenly Taylor stated he smelled an odor similar to burning Car brakes . He felt overpowered by the smell - and could not speak! Within a few minutes, several smaller Spheres appeared. They hovered near the larger Craft. The larger Craft began to (at this point) to hover off the Forest floor. The smaller Sphere (with blinding speed) - few over to where Taylor was hiding and attached themselves to his trousers! He felt no pain only heat . Taylor tried to walk, but could not. The next thing he remembers was waking up on the Forest floor (apparently unharmed). The Objects were gone. Making his way back to his vehicle he drove straight to a Hospital. After examination, he was cleared (with only a small scrape on his head). Taylor went back to the site of the encounter. He found no marks or related evidence. 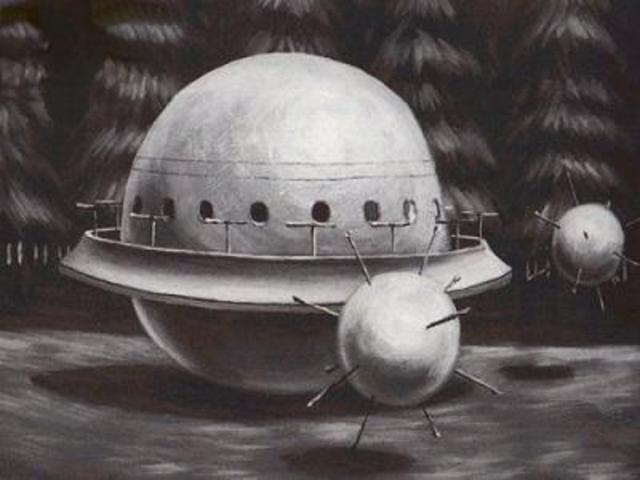