The Case of Thomas Merrylin

Perhaps as bizarre a Tale as our previous Case of The Count of St. Germain, Thomas Merrylin is a name that seldom comes across One’s daily musings. Much of His story is unproven, save for His unique and bizarre collection of oddities. Merrylin (which is spoken as ‘’Merlin’’ – Go Figure) has a birth record from London, England in 1782. The son of a Titled Army General, He was wealthy. Thomas supposedly studied Anatomy and Biology and was seen (as it is told) as somewhat o an expert in both. But Thomas had a knack for the unusual. He supposedly traveled The World collecting examples of bizarre creatures and artifcts which we now classify as Cryptids (unknown species, often thought to be long extinct or having lived in the realm of Folklore and Fantasy). His collection grew. Further, Thomas was said to have developed a penchant for The Occult, namely Alchemy.

By 1882, Thomas began to catalogue His strange collection. This is made even more stranger due to the fact that by this time, He was 100 years old! But those in Society who knew Him, said He looked all the better for 40 years old. He seemed to NOT age anymore. Thomas also wrote journals, stating that He was an itinerant ‘’Vampire Hunter’’, and often – after a ‘’kill’ would de-flesh the creatures skulls and collect them. The bizarre tale of Thomas Merrylin vanishes after 1882 – only to be picked up again in 1942! According to several Newspaper articles (the paper which have long thought to be fakes), Thomas donated a massive amount of funds to rebuild an Orphanage that was destroyed by the (then) on going German V-2 Rocket Attacks (World War II). After this selfless act – Thomas disappears – never to be heard from again. If true, He was 160 years old by the time!

In 1960, construction workers were demolishing a long abandoned and decrepit House in London. In the basement of the dwelling, they found over 1,000 wood crates. Inside was a collection of journals, notes and specimens of very unusual appearances. It would turn out that this house was once owned by none other than our Thomas Merrylin. The collection would become auctioned property of one CV Jones . He in turn turned them into a Cryptid Museum, which can still be visited today. The Collection purportedly shows small, bat-like, Fairy creatures (or perhaps Humoculus, if Thomas was an Alchemist), Their tiny skeletal frames are inside small cotton-lined boxes. Also, skeletal displays of what can only be claimed to be ‘’Baby Dragons’’, can be viewed. Of course, there is Thomas collection of ‘’Vampire Skulls’’ and His ‘’Vampire Hunting and Killing Tools’’, all hand crafted weapons of wood and silver.

Most skeptics readily point to CV Jones as being a kind of modern PT Barnum. Further, Jones created (crafted) the collection (and story), as a Tourist attraction. The existence of Thomas Merrylin was also contrived. Besides who indeed could live 160 years. But then perhaps is the mystery of how Jones has only been seen in public several times. He does bear a bit of a resemblance to Thomas as well……One Can Wonder……… 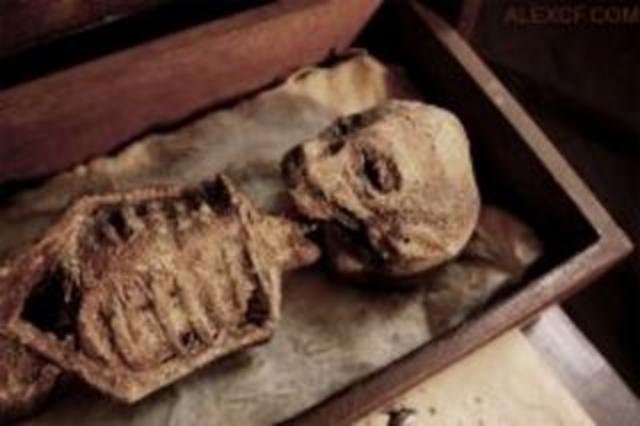