Bob White is a ''Lucky Man''. Not only did he encounter a UFO, He collected a very strange piece of proposed evidence of the Craft. This is a case that still causes many to wonder. The encounter happened in May of 1985. Bob White and a friend were driving from Denver (Colorado/US) to Las Vegas (Nevada/US). Driving on the lonely Interstate Highway many other times in the past -  They seldom saw any vehicles (other than the normal commercial trucking, transporting their goods from one part of the Country to the other). Reaching the Utah (US) Border, it was around 3 A.M. White stated that He was tired and wanted to rest his eyes. Suddenly He and His friend saw a large undefined Disc-like Object streak across the skies in front of their vehicle. A strange glowing, vapor-like contrail was being emitted from the back of the Craft. The Craft lost some altitude and actually passed over their car! Suddenly White noticed an orange, glowing piece of something fall from under the Object . He saw it clearly strike the desert floor (continuing to glow). The Object ''course corrected'' and gained altitude and rose up into the sky (and away). White and his friend went over to where the smaller thing that fell was.

The glowing had stopped, but it was still giving off great heat . The item looked like a tear-drop shaped piece of metal . It had strange waving or scaling shaping on it's surface . White claimed to have had the artifact examined. White states that the article is composed of an unknown metal-like element - and is surprisingly light. White theorized that the Ship was having some sort of difficulty and that whatever it did to correct this, involved the purging of the strange piece of metal. White, at the time (still alive and 73!) - decided to make a buck off his find (As it were). He opened a Museum of The Unexplained in Branson, Missouri (US). Featured in the Center Ring is the piece of ''Extraterrestrial Slag'' . It is protected with state of the art electronics and cameras. ANY Government attempts to examine it (other that the State Metalurgical exam, has been declined). White DID allow the artifact to be examined by the American Cable Show Discovery Science (who was doing a piece of UFOs and Contactee's) and later by another interested Cable Network The History Channel Their tests of a sample of the artifact was inconclusive . In fact, after White's death in the late 1990s -  another strange thing happened. The Museum closed and the artifact has disappeared. 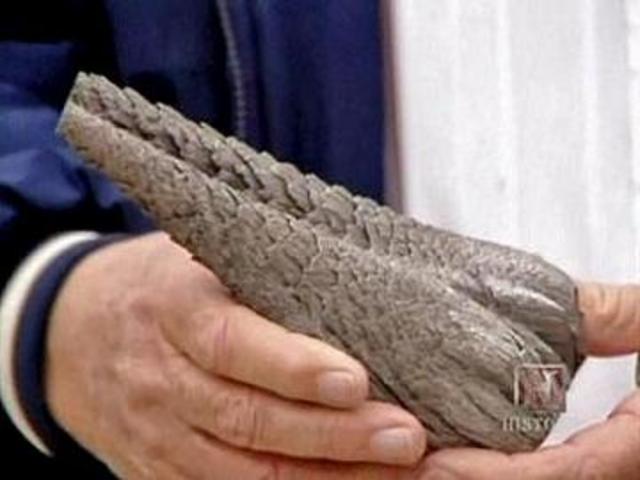